If your transfer starts from the Dubrovnik Airport DBV – Cilipi, the length of our trip to Podgorica airport is around 3 hours or 135 km if we go through Montenegro, or 150 km if we go over Bosnia and Hercegovina and start from City of Dubrovnik.

Going through Bosnia and Herzegovina to Montenegro 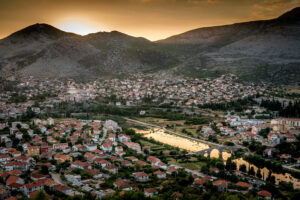 If we start our journey from King’s Landing – Dubrovnik, a town protected by UNESCO route would be by visiting Trebinje. We will make a short break there, then continue to Niksic and finally come to Podgorica Airport. On our way, we will pass across two border crossings. The first is the one at the exit from Dubrovnik on the road to Trebinje called Gornji Brgat border-crossing, while the second is at the exit from Trebinje and the entrance to Montenegro – Vracenovici crossing. These border crossings are small, but that does not mean that there is no traffic during the summer months and there is no waiting for up to half an hour.

As we promised, a short break is in Trebinje, a peaceful and charming town situated in a picturesque valley in heart of Bosnia and Hercegovina. The Old Town was built on the right bank of river Trebisnjica above the deepest place in the river, called Ban-vira, named after the legend of the ban who drowned in the vortex. We recommend Tvrdos Monastery & winery visit, a place known for its wines made by monks. Its two cellars are particularly impressive, with one being fairly modern in age and the other dating back to the 15th century. Trebinje is recognized for its natural beauty as well. Mount Leotar is one of the highest peaks where many people come to jump off. Do not forget a Fort Strac. From Dubrovnik to Trebinje there is just an hour ride (or less in off-season months). 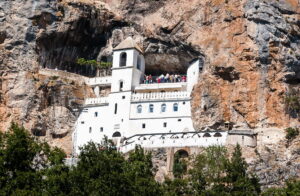 Once you have charged the batteries with positive energy, tasty food, and wonderful wines we can continue our journey. The next stop will be in Montenegro in Niksic. Niksic is the second largest town in Montenegro, just after Podgorica. It is recognizable for its beer ‘Niksicko Pivo’, Rock&Roll culture. You would certainly admire Ostrog, a Monastery built in the 17th century. It is located between the cities Danilovgrad and Nikšić. It is built up out of two churches. The so-called Upper Church is built in a Cave and the Lower Church dates from the 18th century. The scenery that this monument represents is outstanding. Now, when you are full of impressions, we can continue to Podgorica.

Ferry over bay of Kotor

On the other hand, if you are starting from Dubrovnik Airport to Podgorica Airport, we would suggest you the route that follows the sea via Montenegro, crossing the border at Karasovici (CRO) -Debeli Brijeg (MNE). Unfortunately, in the summertime, there are possible waits for around an hour at the border. The first town on your way after the border is Herceg Novi with village Kamenari. There you are taking a ferry to Tivat and continuing to Budva – the metropolis of Montenegrin tourism, thanks to the great number of beaches that make this town a most desirable tourist destination. The Old town of Budva lies on a small peninsula and represents a treasure chest of cultural heritage. After a short break there, we are going to Podgorica Airport.

Luckily, if we still have time, we will explore a little bit the capital of Montenegro. Podgorica has great wide promenades with a lot of bridges passing over Moraca, one of the biggest rivers crossing the capital. It has developed so fast intending to compete with other capitals of the region. None left Podgorica before visiting Millenium, the most famous bridge. But we would direct you to Cijevna waterfalls where you can enjoy the spontaneous beauties of nature and contrasts that can not leave anyone indifferent.

2021 prices per vehicle, include tax, tolls, parking and ferries (DBV/DBK to Podgorica)

We use cookies on our website to give you the most relevant experience by remembering your preferences and repeat visits. By clicking “Accept All”, you consent to the use of ALL the cookies. However, you may visit "Cookie Settings" to provide a controlled consent.
Cookie SettingsAccept All
Manage consent

This website uses cookies to improve your experience while you navigate through the website. Out of these, the cookies that are categorized as necessary are stored on your browser as they are essential for the working of basic functionalities of the website. We also use third-party cookies that help us analyze and understand how you use this website. These cookies will be stored in your browser only with your consent. You also have the option to opt-out of these cookies. But opting out of some of these cookies may affect your browsing experience.
Necessary Always Enabled
Necessary cookies are absolutely essential for the website to function properly. This category only includes cookies that ensures basic functionalities and security features of the website. These cookies do not store any personal information.
Non-necessary
Any cookies that may not be particularly necessary for the website to function and is used specifically to collect user personal data via analytics, ads, other embedded contents are termed as non-necessary cookies. It is mandatory to procure user consent prior to running these cookies on your website.
SAVE & ACCEPT