After the unforgettable vacation spent in Dubrovnik town by exploring the King’s Landing town or directly from Dubrovnik Airport, we continue by car to Medjugorje in Bosnia and Herzegovina. Transfer duration is around up to 3 hours.

The first optional stop on the road will be in Ston. It is a real hidden gem located on the Peljesac peninsula. Ston, and especially Mali Ston is known for its traditionally farmed oysters that you definitely must taste with some good Peljesac wine as “dingac” or “postup”. Mali and Veliki Ston are connected by one of the longest walls in Europe and they have one of the oldest, still functioning salts works they have been proud of for centuries.

Up to the pauses and borders, the trip will take up to 3 hours, driving for around 180 km from Dubrovnik Airport. In case you would like to enjoy the best scenario, the nature, and the travel along the road, you will have 3 times border check-ups during the trip. The first two are Zaton Doli (Cro) – Neum 2 (BiH) and the second is Klek (Cro) – Neum 2 (BiH).

Neum is the only Bosnian town on the Adriatic Sea coast thanks to the old Dubrovnik republic historical decision in the 18th century, as well it is separating Croatia in half. Now, as Croatia is about to build the Bridge of Peljesac it won’t last forever. Neum is a wonderful place for a quick break, delicious Turkish coffee, and quite cheap meals. According to the borders, on our way to Međugorje, we have one more – Doljani (BiH)-Metkovic (CRO). Each one does not take a long time to wait. 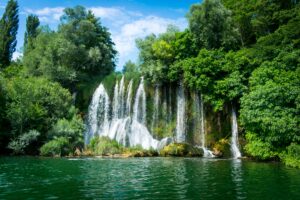 The paradise of Kravice Waterfalls is located near the town of Mostar and will be on our way. They are special because you can swim and climb around the rock pools and waterfall systems that comprise them. Summer is the perfect time to visit Kravice Waterfalls if you want to spend some beautiful time swimming in the pools. The water is chilly, the landscape is wonderful. There are a lot of places at Kravice Falls to lay in the sun, enjoy an ice cream, or spend a relaxing afternoon.

Finally, it is time to visit and feel Međugorje. Medjugorje means a place between the mountains – a small village in Bosnia and Herzegovina, located in its southern part near the towns of Citluk and Mostar and the border with Croatia. It is one of the holiest and most spiritual places in all of Europe.

The first appearance of the Mother of God took place in 1981. Six children saw a woman with a baby in her arms who motioned for them to approach her. She said she is the Queen of Peace and further her messages were dedicated to peace in the world, faith, conversion, fasting, and prayer. Enchanted by her messages, thousands of people came to Medjugorje to pray, but she remained invisible to all other believers. Those to whom she appeared admit that the Mother of God appears to them even today (to some once a month, to some once a year) to convey her messages.

The first appearance is believed to have occurred on mountain Podbrdo, that is why this is the main place for the prayer. A monument of the Queen of Peace was built here in 2001. On mountain Krizevac the pilgrims put a cross for the 1900 anniversary of Jesus Christ’s crucifixion. Medjugorje is a unique place filled with positive energy, thoughts, and peace. Here there is no criminal, violence, rudeness, or negativity. It is a place where each person can fulfill his living energy ad find motivation for a better life.

2021 prices per vehicle, include tax, tolls, parking and ferries (DBV to Medjugorje)

We use cookies on our website to give you the most relevant experience by remembering your preferences and repeat visits. By clicking “Accept All”, you consent to the use of ALL the cookies. However, you may visit "Cookie Settings" to provide a controlled consent.
Cookie SettingsAccept All
Manage consent

This website uses cookies to improve your experience while you navigate through the website. Out of these, the cookies that are categorized as necessary are stored on your browser as they are essential for the working of basic functionalities of the website. We also use third-party cookies that help us analyze and understand how you use this website. These cookies will be stored in your browser only with your consent. You also have the option to opt-out of these cookies. But opting out of some of these cookies may affect your browsing experience.
Necessary Always Enabled
Necessary cookies are absolutely essential for the website to function properly. This category only includes cookies that ensures basic functionalities and security features of the website. These cookies do not store any personal information.
Non-necessary
Any cookies that may not be particularly necessary for the website to function and is used specifically to collect user personal data via analytics, ads, other embedded contents are termed as non-necessary cookies. It is mandatory to procure user consent prior to running these cookies on your website.
SAVE & ACCEPT