After a pleasant flight (or stay in Dubrovnik), you can continue the journey with our professional transfer from Dubrovnik (Airport) to Sarajevo. Depending on the break and waiting at border crossings, our trip should take approximately 5 hours and we will pass the border 3 times.

There are several ways to get to Sarajevo, but we decided on the one where you can enjoy the city beauties of Ston and Mostar, as well as trying one of the most delicious lambs in Europe. Enjoying the capital of Bosnia and Herzegovina is inevitable. 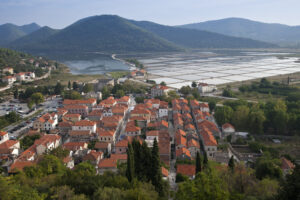 The first stop on the road will be Ston, located at the beginning of the Peljesac peninsula. Ston and Mali Ston are connected with the world-famous wall, among the longest ones in Europe dating from the 14th century. Those are small charming villages with a rich cultural background. Thanks to the position, towns instantly developed a large production of salt and seafood – especially oysters. That is why it is a nice choice to have lunch there with a traditional glass of good local wine.

Continuing the transfer, we will need your passports because we are entering into Bosnia and Herzegovina, their only town on the coast – Neum. There are usually not many waits at these border crossings, so we plan to pass 12 miles of Bosnian coastline quickly.

We will descend soon into the picturesque delta of the Neretva river and continue our way in direction of Bosnia and Herzegovina by passing a border in Metkovic (Doljani border), waiting should be less than 30 minutes. 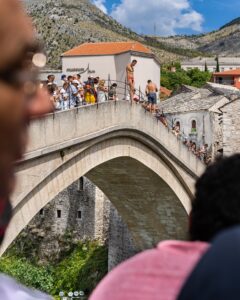 Neretva river will follow us to our next optional stop – the city of Mostar. The most attractive thing that we suggest to visit in Mostar is the Old Bridge, which dates from the 16th century. It is the most recognizable architectural landmark. Stretching 28 meters across the Neretva river, it connects the two sides of the city, the Croatian and Muslim parts today (Mostar is informally divided from 1993 War of Bosnian independence). Outside the bridge, there are several things to do in this really rare and specific town like hiking through the nearby mountains, swimming under the waterfalls, exploring the abandoned ruins, shopping, and have traditional Turkish coffee and baklava as your desert.

Continuation to Sarajevo – a lunch in Jablanica 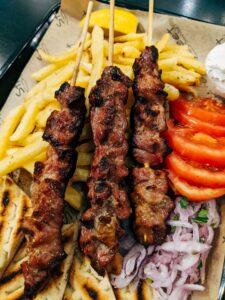 We cannot help stopping in Jablanica, an unexpected fusion of stunning nature and delicious gastronomy, accompanied by amazing history and cultural heritage. This is the region where marvelous man-made Jabanicko Lake, as well as spectacular highlands of Blidinje Nature Park and Mount Prenj is known as Bosnian Himalayas, are just some of the beauties that await passionate nature enthusiasts. The town is also well-known for its specially roasted lamb meat and rakija bukovaca, which leaves nobody indifferent. 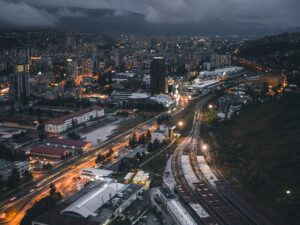 We will continue our trip to Sarajevo, the capital of Bosnia and Herzegovina which is surrounded by five Olympic Mountains. This is a city with a very tumultuous history, culture, and gastronomy. Certainly, one of the most interesting historical events is the murder of Franz Ferdinand, which is why the First World War has started. As you have tried every traditional dish along the way, Sarajevo cannot be an exception. While visiting Bosnia’s capital, you cannot miss a plate of tasty ćevapi, the national dish of Bosnia dating from the Ottoman rule. Bascarsija center is full of narrow streets, small shops, acting as a mix between the Eastern and Turkish influences. Not forget to visit the tunnel museum, memorial Kovac commentary, Latin bridge, and many things more if you manage before the flight.

2022 prices per vehicle, include tax, tolls, parking and ferries (DBV to Sarajevo)